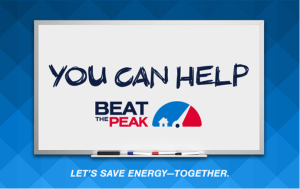 Members of Horry Electric Cooperative can sign up to receive alerts asking them to reduce their energy use during times of peak demand for electricity.

“The co-op has been managing peak demand on the system for many years,” says James P. “Pat” Howle, executive vice president and CEO for Horry Electric. “We regularly track energy use on the system and go into what we call ‘load control’ when the peak demand for electricity hits.”

“Think of it as rush hour for electricity,” says Penelope Hinson, spokesperson for Horry Electric. “There are times in the day when you know traffic is going to be bad as people rush to work or school in the mornings and then rush home at the end of the day,” she continues. “To save time, gasoline and sometimes aggravation, it’s best to avoid being on the road  during those times if you can arrange your schedule to travel during other times of the day.”

“It’s pretty much the same for energy use,” says Hinson.  “There are times of the day in summer and winter when people are going to be doing tasks that increase energy use on the system.”  The usual peak times for energy use are 6-9 a.m. in the winter and 3-8 p.m. in the summer.

Horry Electric has been managing peak demand for many years through voltage reduction. “On top of that, we have 5,501 members participating in our water heater load management programs,” says Howle. “Through those programs alone, we’re able to shave over 2,200 kilowatts of peak load per peak incident during summer months and over 3,800 kilowatts of load per peak incident during winter months.”

“With member participation in the Beat the Peak program, we can have an even bigger impact on controlling load and avoiding peak demand,” says Reed Cooper, manager of engineering. “When members receive the alerts, all we’re asking them to do is shift energy consumption from times when demand for electricity is highest.”

When demand for electricity rises, so do the costs. “When the cooperative purchases large amounts of energy during peak periods over the course of a year, it puts upward pressure on the electricity rates the co-op and our members pay,” says Howle. “By ‘beating the peak’, we can all save a significant amount of money by keeping wholesale power costs low and stable.”

How you can help

It’s easy.  Sign up to participate in the Beat the Peak program to receive alerts by text message, email or phone.  “When you get an alert, make a conscious effort to shift energy use to other times of the day,” says Cooper, adding that the purpose of the effort isn’t to stop using individual appliances altogether, just use them during times when the demand for electricity is not high.

“Shifting energy use to different hours of the day will help hold down everyone’s costs,” says Howle. “If we can work together, it’s a win-win for all members and the co-op.”

Ready to help?  Sign up here and don’t miss out on the video, which explains the program, at the top of the sign-up page.

Beat the Peak is an initiative intended to introduce members to the concept of ‘peak demand’ periods and why those particular times are important to their electric cooperative.