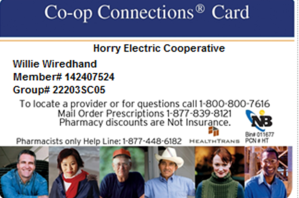 The Touchstone Energy® Cooperatives board of directors has commended Horry Electric Cooperative for being a best-in-class performer with the Co-op Connections ® Program.

“Your members and 103 participating local businesses benefit from your efforts to support and promote the program,” said Dan Brown, president of the Touchstone Energy Cooperative board of directors in a letter addressed to James P. “Pat” Howle, executive vice president and CEO of Horry Electric.  “Your card has been used 23,606 times for prescriptions and saved your members $351,103.31 on the prescription discount alone.”

“We are very proud of having been named as a best-in-class performer, but we’re even more proud to be able to offer the benefit to our members,” says Howle. “It shows our commitment to community, which is one of Touchstone Energy’s four core values.”

Horry Electric is one of 727 Touchstone Energy cooperatives in the United States. “We hope you will share some of the secrets to your success with the others involved in the program,” said Brown. “We want to showcase your hard work and effective message strategy in hopes that other cooperatives will follow in your pursuit of excellence.”

As part of its communication plan, Horry Electric features Co-op Connections deals each month in the local pages of South Carolina Living magazine and spotlights participating businesses periodically through its social media outlets. Reminders about the availability and benefits of the program for members are often in the headlines of the cooperative’s primary news outlet, which is a blog that runs on the main page of horryelectric.com.

The Co-op Connections member benefit card now has more than 21,000 local and national retail discounts, including the 103 participating local businesses secured by Horry Electric.  Nationally, co-op members have saved more than $34.7 million on prescription medications – an average discount of about 37 percent per prescription.

Lost your card? No worries, print your own!

Check out the deals and discover the value of  co-op membership!